Felicity Lloyd – On beating cancer and becoming the fastest AG’er at IM Busso!!

I entered Busselton IM when the entries first opened a year ago.  Having made the decision to have an easy early winter, not train too much and give my body a well earned break after 5 IM in less than two years in the sport and Abu Dhabi long course in March this year.

Unfortunately fate had other plans in terms of giving my body a rest.  Instead of the sleeps ins and time with family and friends that I had envisaged the “down time” got taken away by a diagnosis of advanced malignant melanoma.  On May 23rd this year I went to the doctor to have him check a mole on my back I had checked 3 times in the previous 2 years.  As always he told me it was nothing (2 different doctors had), but I told him it bled and I wanted it off anyway.  So on the 24th I was off to the surgeon where I was diagnosed.  From there they began chasing the cancer.  Three surgeries were required and some very nervous waits for results as it had spread into my lymphatic system.  I very quickly went from a healthy carefree 31 year old, to being asked some fairly blunt and scary questions by very serious old men in white coats.  Luckily, it appears it has been caught in the early stages, I’m still on treatment, but things are looking good.

Although I was completely unsure of what the future held, I was determined to get to Busso this year.  In the back of my mind if I could get there, day by day; training session by training session and doctors visit by doctors visit all would be ok.  So I kept on training with the blind belief that would be the case.  Now here is the great thing about sport, it makes you healthy.  I had two surgeries that the doctors anticipated would take me weeks to recover from, yet I was on the bike (trainer) the next weekend.  My fitness and the sport of triathlon helped me mend, both mentally and physically.

So onto the prep, not ideal by any stretch of the imagination.  Swimming has always been my weakness, and I couldn’t swim for quite some time during winter.  There were plenty of times where I struggled for both motivation and focus during training. Amazingly I came into the last few weeks before the race feeling relatively strong and with times in training that weren’t too bad.  I was however lacking a lot of confidence in my endurance especially on the bike, but was focusing on delivering a controlled and well thought out race.  What I wanted to do was make good decisions and execute the best race I could with the fitness I had.  To some extent whilst I was there to race, after the previous 6 months, I was also going to be really happy to cross the line.

Race week went well, my partner, parents and I arrived Tuesday and my nieces, sister and brother arrived on Friday.  My parents always watch me race (my mum in particular is sports mad!) and over the last few years I have been fortunate enough to have all my siblings and nieces and nephews come along to various races.  Support is really a wonderful thing!

So I went into race day with a three very clear things to check-in with myself on throughout the day.  How’s the pacing, am I taking in nutrition and don’t get ahead of yourself, it’s a long day. These things had brought me undone before, and knowing I wasn’t necessarily in the form of my life I wanted to see what “racing smart” would do for me.

Race morning went smoothly, and I was into my wetsuit, saying my goodbyes to family.  A quick warm up swim was all that was possible with the pro-start just before age groupers.  I had spent some time working out where I wanted to start in the swim, and got myself into position.  First time ever on the first line at an ironman.

The swim start was uneventful, I swam the first 200m or so hard and found early feet to sit on.  The pack I was in pulled quite wide of the jetty, a common mistake in Busso that leads to 150-200m of extra swimming (according to the locals).  I decided to stick to the fastest line, but this left me swimming predominantly on my own.  Maybe not a great decision.  At the far end turn buoy I got back in a pack for the return leg.  I came out the water a little over 61mins.  Slightly disappointed, but a PB by around 3 mins in an IM so can’t complain.  I had an quick transition and was onto the bike. 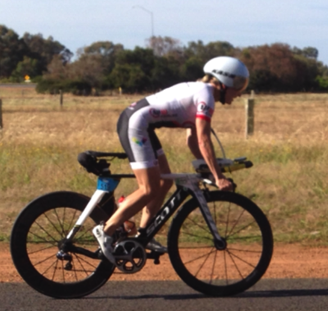 The entire bike went very smoothly.  I made use of the good early conditions knowing the wind would blow up on the second lap and went through the first lap in around 2:28. Knowing the conditions were starting to worsen this would mean just over a five hr bike.  Which it did.  My watts never changed and I came in with a 5:05.  A faster bike than I have done before at Busso, but about 10 mins off my fastest IM bike split. I thought at the time I came into T2 around 4th or 5th in my age group (as its turns out I was 2nd).

The next hr is where my races have tended to come unstuck.  Chasing down the girls up the road and forgetting I had 3.5hrs to do it! The next 20-25km’s were a constant mental battle to keep the pace easy.  Mid way through the second lap I saw a fellow AP10’er who told me I was leading my age group.  Given I had only passed a handful of girls including 2 pro’s that meant I had actually come off the bike in a better position than I thought. The message from Alex was clear, and reflected the mantra already in my head…. “Stay in control and don’t get ahead of yourself”. Then somewhere around 25-28k in the body started reminding me why I was running easy for the first half.  Around this time I passed the only age grouper still ahead of me, someone I have raced a number of times over this distance and never beaten.  I held a good minute gap on her to around 38k with the thought that I needed to keep a bit in the tank in case the finish became a sprint!  Lucky I did, I think she was thinking the same, both of us upping the pace for the last 4k by 20s / km.  Running into the finish chute I had a quick look back and couldn’t see her. Being first age grouper was beyond my expectations of the day so I was pretty excited! 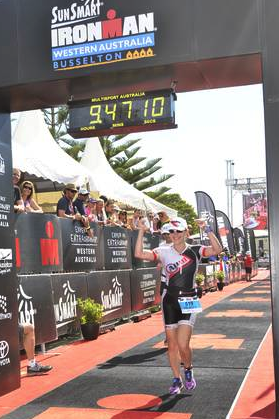 In the spirit of not getting ahead of myself I had also not looked at my total time all day, so seeing a 9:47 something was a nice surprise! Very close to a PB day.  I saw my family as I came down the finish chute gave my nieces a high five.  They are only 8 and 11 and had endured a long day and had been awesome support.

I owe a huge debt and thanks to many people, but in particular – To my partner Mark, my family and a couple of very important doctors who encouraged me to not let illness take over my life.  Alex and AP10 who took on a new, seemingly healthy athlete only to have me get sick a few weeks later.  Alex, I don’t know how you got me in the shape you did to be honest, but I followed the plan exactly and I listened to your words and trusted that I was ready! And it turns out I really was!! Andy and the crew from Cycleworx who help me out with rock solid bikes, right down to the panicked addition of a new front wheel a fortnight before race day. And of course to everyone from organizers and volunteers to supporters who are out there race day.  Busso is an amazing place and if you haven’t raced there, then go! The locals are awesome.

Every Ironman race teaches you something new. This race was all about the value of race day execution.  In an already busy life its easy to spend every spare minute training which means that I had spent very little time focusing on what I would do race day.  This race was the opposite, we with Alex’s guidance we spent a lot of time thinking and practicing race and nutrition strategies, with great attention to every detail.  After being told many times that this would pay off, I learnt for myself that it really does!

So, I took my Kona slot.  It’ll be my third time racing there and I am looking forward to a less eventful build to Kona ‘15.  Onward and upward.

Lessons from Cadel and the Tour

Ironman Barcelona – so close but so far!!!

Some good news from Callala!!